This study was conducted to compare the effects of foliar spray and sub-irrigation of the triazole fungicide diniconazole on the regulation of stem elongation and to investigate the stimulation of root system development during the seedling stage. Comparing the two application approaches, there were significant differences in the leaf area, leaf area ratio (LAR), plant height, compactness, fresh shoot and root production, relative growth rate (RGR), and root to shoot ratio (R/S). At the same application concentration, the sub-irrigation showed a better retarding effect on growth than the foliar spray, because the PGR activity of diniconazole in root absorption was higher than that in shoot absorption. For reaching a target of 20% to 30% inhibition rate of stem length, foliar application concentration of diniconazole exceeded 10 , however, only approximately 1 was required in the sub-irrigation application. The root system of tomato seedlings responded strongly to diniconazole application. Total root length, root volume, root average diameter, and the number of root tips increased when diniconazole was sub-irrigation application at 1 . A reduction in fine roots (diameter range of 0 to 0.3 mm) and an increase in the roots with a diameter range of 0.3 to 0.6 mm was observed, and this may contribute to the increase in average diameter. The increase in root average diameter may be positive because root penetration increases with root diameter. Our results suggested that sub-irrigation maximized the PGR activity of diniconazole to enhance the retarding effect. And it also possible to enhance the tomato seedling root system by diniconazole stimulating with a lower concentration.

Plug seedling production system meets the rapidly increasing demand for high-quality seedlings which is not only performed in the stocky size of shoots but also in a highly developed root system. Overgrowth in the stem is one of the major problems in this system caused by the high seedling density and excessively elongated stem seriously declines seedling quality (Zhang et al., 2003).

The application of plant growth regulators (PGR) is a reliable and precise method to overcome this issue (Choi et al., 2011). Some triazole based fungicides both have PGR property have been applied in various plants, they protect plants from varieties of environmental stresses (Fletcher et al., 2000; Kishorekumar, 2006). Existing studies have recognized the PGR property of triazole compounds that it affects the isoprene pathway and shifts in the balance of certain important hormones such as ethylene, gibberellin, abscisic acid (ABA), and cytokinin (Fletcher et al., 2000; Jaleel et al., 2008), and thus regulating the growth of plants. In seedling production, the triazole compounds have been stated to be effective in controlling plant height growth (Jung et al., 2020; Kim and Suzuki, 1989; Zhang et al., 2003). Also, triazole compounds have been shown to influence root growth, however, the effect may be either inhibitory or stimulatory, depending on the species and the concentration (Fletcher et al., 2000). Althought Kim and Suzuki (1989) reported that triazole without affecting the roots only reduced the growth of stems and leaves, significant changes in the development of the root system caused by triazole compounds have been observed in many species (Bausher and Yelenosky, 1987; Kvien et al., 1987). Those growth indexes have determined the positive effect on root growth, however, it still failed to describe the characteristic of the root system affected by triazole compounds.

Few writers have been able to draw on any systematic research into root system development affected by triazole compounds (Cho and Chiang, 1997). Besides, there is still uncertainty whether applying triazole compounds to different organs will have different responses in tomato seedling. The objectives of this study were to compare the effects of foliar spray and sub-irrigation of the triazole fungicide diniconazole on the regulation of stem elongation and to investigate the stimulation of root system development.

Grafted tomato seedlings from Hoban Seedling Company (Chuncheon, Korea) were used. Seeds of Scion cultivar ‘Ariadni’ were sown on 4 April 2019 and tomato rootstock ‘Pentagon’ on 6 April 2019. They were sown in 128-hole plug trays (Bumnong Co., Ltd., Jeongeup, Korea) filled with a commercial substrate (BM2, Berger Group Ltd., Quebec, Canada). Then 30 days after sowing, scion cultivar was grafted onto the tomato rootstock using the splice grafting method. The grafted seedling was grown in a cylindrical paper pot placed in the 32-hole plug trays. When the surviving grafted seedlings had grown strong enough, the seedlings were transported from Hoban’s seedling nursery to the experimental greenhouse on the farm of Kangwon National University (Chuncheon, Korea) for diniconazole treatment. During the experiment, commercial fertilizer (Wonder Grow Fertilizers, Chobi Co., Ltd., Seoul, Korea) was applied to the seedlings twice a week, the same management as at the Hoban seedling nursery. The experiments were carried out from April to June 2019 in the experimental greenhouse on the farm of Kangwon National University.

Diniconazole was provided by the Dongbang Agro Company (Seoul, Korea). Its product name is ‘Binnari’, and it has 5 % net content. Control plants were maintained with no diniconazole application, using the same cultivation method as in the Hoban seedling nursery. The diniconazole solutions were prepared by dissolving Binnari in tap water to make 1, 10, and 30 mg‧L-1 solutions. In the foliage spray treatment, seedlings were sprayed until all the leaves were thoroughly wetted. In the sub-irrigation treatment, the diniconazole was applied to the substrate and completely saturated the substrate. Both spray and sub-irrigation were treated once on 26 May 2019, and all the seedlings were grown in the greenhouse.

Growth measurements and sampling were performed on 26 May 2019 and every 5 days after that. Since the growth suppressing effect from triazole compounds is temporary and ephemeral (Lee and Rho, 2000) and diniconazole did not affect the flowering and fruit-bearing development of tomatoes, a total of 5 sampling sessions were conducted. The weight of the seedlings was then measured using an electronic balance. The plant height was measured from the main stem base to the top of the young plants using a ruler, and the stem diameter was measured at the internode above cotyledons using vernier calipers. The total leaf areas were determined using a leaf area meter (LI-3100C; LI-COR, Lincoln, NE, USA). Plant tissue dry weights were obtained after drying at 80°C for at least 72 h in the oven (Mov-212F, Sanyo Electric Co., Ltd., Osaka, Japan). The relative chlorophyll contents of leaves were determined using a SPAD analyzer (SPAD-502 Plus, Konica Minolta Sensing Inc., Osaka, Japan).

The substrate was gently removed by flowing water. After the root systems cleaning the high complexity first-order lateral roots were separated from the axile root. The whole root system of each sample was stored in a plastic tube. Roots were scanned with a flatbed scanner (Epson Perfection V800 Photo color scanner, USA) at a resolution of 400 d.p.i. The root images were analyzed using a WinRHIZO Pro 2009b (Re´ gent Instruments Inc., Quebec City, Canada) image- analysis system. We performed the analysis of variance (ANOVA) to assess growth parameters compared with control, and the significant differences among all treatments were compared using Ducan’s multiple range test at 5%. We also performed the general linear model (GLM) for comparing the effect of spray and sub-irrigation. Between- subject effects evaluated variances of treatment methods, diniconazole concentration, and interaction effects. The SPASS Statistics software V24 was used for this purpose.

Results of between-subject effects showed that the dwarf effect of tomato seedlings significantly differed between application methods. Both foliar spray and sub-irrigation diniconazole decreased stem elongation at 10 and 30 mg‧L-1 solution concentration but the reduction varied greatly (Table 1, Fig. 1). As compared with the control, diniconazole at 30 mg‧L-1 decreased plant height by 27% and 47%, at 20 mg‧L-1 decreased by 12% and 38% for spray and sub-irrigation, respectively. Sub-irrigation diniconazole at 1 mg‧L-1 decreased plant height by 17%, however, no decrease was observed in spray treated seedlings (Table 1, Fig. 1). Both the two application methods increased compactness, diniconazole at 1, 10 and 30 mg‧L-1 increased the compactness by 6%, 13%, and 5% in spray treatments, and increased by 16%, 30%, and 35% in sub-irrigation treatments. But there was also a significant difference in compactness between the two application methods (Table 1).

Comparison of foliar spray and sub-irrigation diniconazole on leaf growth character, plant height, and compactness of tomato seedlings.
xMean separation within columns by Duncan’s multiple range test at 5% level.yNS, *, **, and *** indicate not significant or significant differences of P 0.05, 0.01, and 0.001, respectively.

Comparison of foliar spray and sub-irrigation diniconazole on shoot and root production, relative growth rate (RGR), and root to shoot ratio (R/S) of tomato seedlings.
xMean separation within columns by Duncan’s multiple range test at 5% level.yNS, *, **, and *** indicate not significant or significant differences of P 0.05, 0.01, and 0.001, respectively.

Change of relative growth rate of shoot of grafted tomato seedlings subjected to sub-irrigation (A) and foliar spray (B) of diniconazole.

Change of relative growth rate of root of grafted tomato seedlings subjected to sub-irrigation (A) and foliar spray (B) of diniconazole.

Change of root to shoot ratio of grafted tomato seedlings subjected to sub-irrigation (A) and foliar spray (B) of diniconazole. 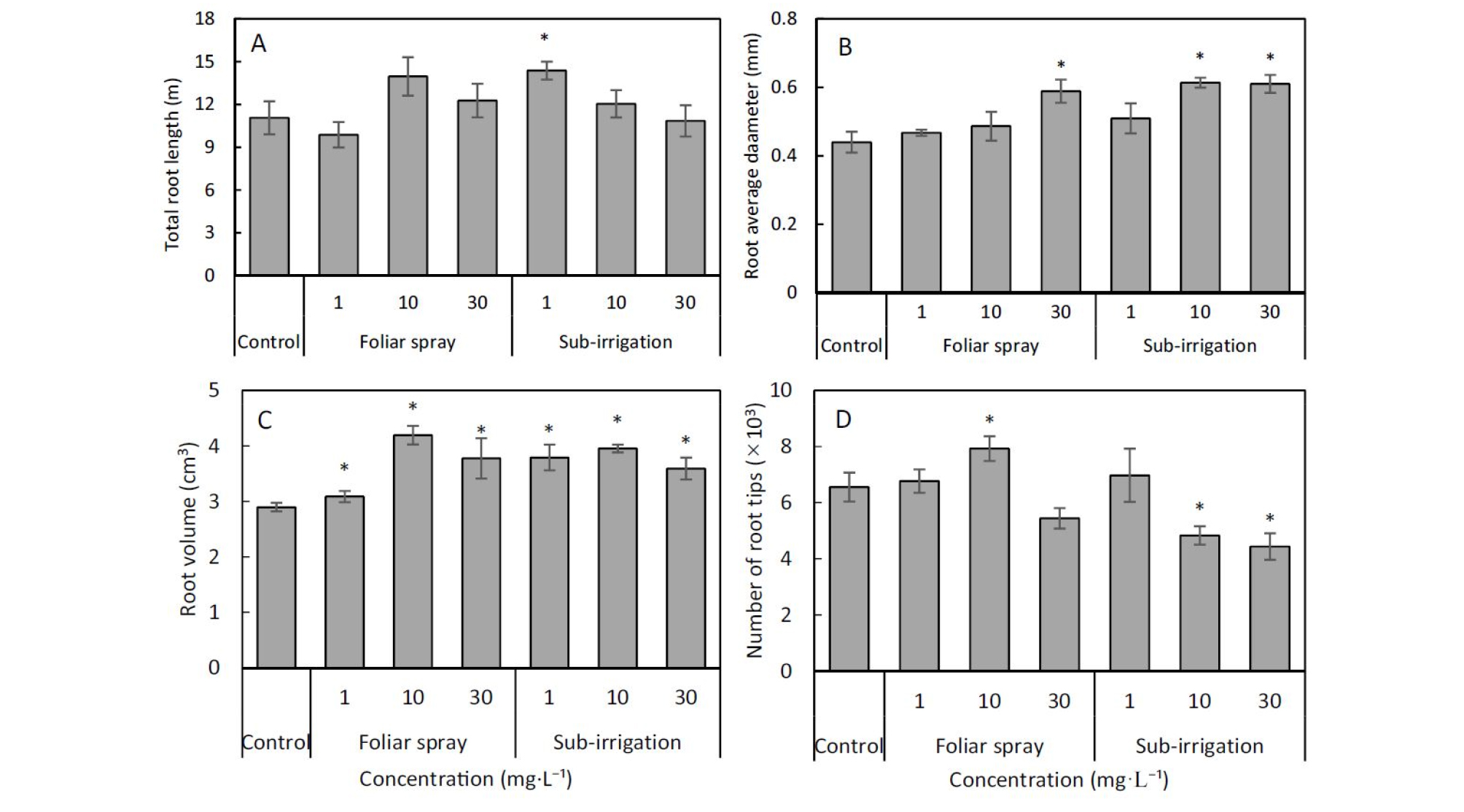 Lee and Rho described the growth suppressing effect from triazole compounds is temporary and ephemeral (Lee and Rho, 2000). The trends that increase in root and decrease in shoot were reversed at 5 and 10 days after treatment compared with control (Fig. 2 and 3). These results are consistent with the temporary and ephemeral retarding effect. This may associate with the hormones changes which also contributes to the shoot growth suppressing. Diniconazle is thought to delay the biosynthesis of gibberellin and cause the growth inhibition of plants (Kim, 2008). Besides, diniconazole is also known to inhibit endogenous ABA catabolism to break its balance thereby increasing the accumulation of ABA (Suttle et al., 2012). Those hormones changes are ephemeral, plants themselves may fastly restore the hormone balance through a variety of physiological and biochemical mechanisms. Our substrate application allowed diniconazole to remain in the substrate for longer periods than foliar spray to maintain stimulating. Furthermore, the foliage spray is easy to affect by various environmental factors such as wind and temperature, however, substrate application may overcome this drawback.

We expect to obtain a strong root system by diniconazole stimulating because triazole compounds have also been shown to influence root growth (Fletcher et al., 2000). It is important to note that the effects on root appear to inhibit or stimulate depending on the plant and the concentration (Fletcher et al., 2000). Data from previous studies have shown that the root to shoot ratio (R/S) of plants treated with triazole increased, and taking root ratio also increased after transplanting in certain plants (Jung et al., 2020; Kim and Suzuki, 1989; Zhang et al., 2003). Similarly, in this study, results showed a significant increase in total root length and root volume by substrate applications of a lower diniconazole concentration but not by foliar applications, also, R/S ratio was increased by substrate applications, but not by foliar spray. Those results suggested that it is possible to enhance the tomato root system by diniconazole stimulating. The responses in root growth are consistent with at least two mechanisms. First, the triazole compounds have an auxin- like effect (Shin and Jeong, 2002), and the auxin promotes root growth by modulating gibberellin response (Fu and Harberd, 2003), likewise, triazole compounds also involved in modulating gibberellin. The second possible mechanism associate with cytokine-like properties and the increasing cytokinin in roots. It has been reported that triazole compounds probably induce plants to produce more cytokinins by stimulating root growth, but rather act as a cytokinin (Fletcher and Arnold, 1986). The reduction of fine roots and the increase of thick roots may be involved in nutrient allocation (Fig. 6), and this may be one of the reasons for the increase in average diameter. Another explanation is that diniconazole may induce an increase in the number of rows and the diameter of cortical cells thus result in average diameter increasing. Notably, root penetration increases with root diameter (Clark et al., 2008). Therefore, the increase in root average diameter may be positive.

Our results suggested that the substrate application maximized the PGR activity of diniconazole to enhance the retarding effect. And, substrate application may overcome some drawbacks of foliar spray, such as the influence of wind and temperature. Further, it is possible to enhance the tomato seedling root system by diniconazole stimulating with a lower concentration.

Go to ContentsGo to Main NevigationGo to Footer